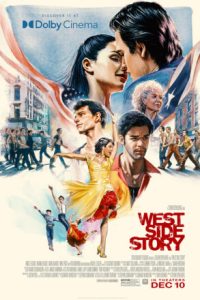 Continuing my personal 2021 Oscar rundown, today I’m focusing on the women I would recognize for Best Supporting Actress.

But first, as I’ve done all week, I’ll give a nod to five actresses who had a great shot of making the cut: Zazie Beetz (Nine Days), Caitriona Balfe (Belfast), Jessie Buckley (The Lost Daughter), Gaby Hoffman (C’mon, C’mon), and Martha Plimpton (Mass).

I initially had an even longer list of runners-up in what was a great year for this category.

And the nominees are…

Yesterday, I mentioned Jason Isaacs’ strong work as the father of a student killed in a school shooting. Now it’s Dowd’s turn to be recognized for her work in the same film, as the mother of the boy who did the shooting.

Dowd has an even trickier role, shouldering the guilt for the damage wrought by her son, but also the grief of a mother who lost her own child. She has turned in so many stellar performances, on film and TV, but this might be her best yet.

DeBose inherited a role tailor-made for Oscar success. But she was also asked to follow in the footsteps of a Hollywood legend. And then she was asked to perform her most emotional scene while sharing the screen with that legend, Rita Moreno. Talk about pressure.

Will Smith’s great work in King Richard would be half as effective without a partner as powerful as Ellis.

She brings dignity and righteousness to Oracene Williams, putting Richard in his place more than once, and preventing the film from drifting into hagiography.

Kathryn Hunter – The Tragedy of Macbeth

Stage and Shakespeare veteran Hunter doesn’t have a ton of screen time in The Tragedy of Macbeth, but she practically runs away with the movie in just a few scenes.

As all three witches, she uses her gravelly voice and contortionist’s body to project a fascinating, unsettling, otherworldly presence. In a film headlined by major stars and full of great performances, hers is the one that stuck with me most.

It’s silly when actors are described as “brave,” given all the real-world scenarios that call for true bravery. But if anybody deserved that descriptor last year, it’s Keough.

Her Stefani is a flashing neon beacon of uncomfortable cultural appropriation, a woman who seems to have no idea she’s white. It’s a creation that, done wrong, could be dismissed as offensive caricature.

But in Keough’s hands, guided by writer/director (and Black woman) Janicza Bravo, Stefani feels completely authentic. She also feels like the villain in somebody else’s story, a fact the movie plays with when it gives her a chance to turn the tables and spin a tale that makes her the hero.

Keough beautifully plays both sides of that coin, and helps us find the real Stefani somewhere in the middle.

And the winner is… Ariana DeBose. I expect DeBose will win the Oscar, and I’ll be thrilled if and when she does.

[ANITA]
A boy like that who’d kill your brother
Forget that boy and find another
One of your own kind
Stick to your own kind!

A boy like that will bring you sorrow
You’ll meet another boy tomorrow
One of your own kind
Stick to your own kind!

[MARÍA & ANITA]
Oh no, Anita, no
Anita, no!
It isn’t true, not for me
It’s true for you, not for me
I hear your words
And in my head
I know they’re smart
But my hеart, Anita
But my heart (A boy like that)
Knows they’rе wrong (Who’d kill your brother)
And my heart (Forget that boy)
Is too strong (And find another)
For I belong (One of your own kind)
(Stick to your own kind!)
To him alone, to him alone
One thing I know
I am his (A boy who kills cannot love)
I don’t care what he is (A boy who kills has no heart)
I don’t know why it’s so
(And he’s the boy who gets your love and gets your heart)
I don’t want to know (Very smart, María, very smart!)

I have a love, and it’s all that I have
Right or wrong, what else can I do?

I love him, I’m his
And everything he is
I am, too

I have a love, and it’s all that I need
Right or wrong, and he needs me, too

I love him, we’re one
There’s nothing to be done
Not a thing I can do
But hold him, hold him forever
Be with him now, tomorrow
And all of my life!

[ANITA, spoken]
He will never be safe here.

[ANITA, spoken]
And no one will ever forgive him.

[MARÍA, spoken]
Will you?

[ANITA, spoken]
Yo can’t ever ask me that.

[MARÍA, spoken]
Will you forgive me?