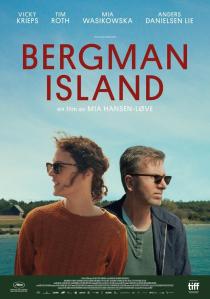 I’ve delayed my year-end movie posts as long as I can, hoping to fit in the last few titles on my watchlist. I managed to catch a couple of them, but I’m still missing some key films, including multiple Oscar nominees Drive My Car and The Worst Person in the World.

I can’t wait forever, though, so over the next four weeks I will offer up my favorite musical moments on screen last year, my favorite performances, and then my personal top ten list. That will take us right up to Oscar night, finally putting the 2021 film year to bed three months into 2022.

My first pick (and these are in no particular order) is from Mia Hansen-Løve’s Bergman Island, a romantic drama about a filmmaking couple who take a working retreat on the island of Fårö, where Ingmar Bergman lived and shot several of his films.

Vicky Krieps and Tim Roth play the couple, and most of the film chronicles Krieps’ struggle to reconcile her roles as wife and mother with her ambitions as a writer and director.

About halfway through the movie, Krieps’ character talks to her husband about the film she’s writing, and Hansen-Løve shifts perspective to tell that story. In the film-within-the-film, Mia Wasikowska plays Amy, an American filmmaker who travels to Fårö and encounters a former lover, rekindling a romance she didn’t realize she missed so much.

Bergman Island is a deeply personal and meta film. Hansen-Løve wrote and directed a film in 2011 called Goodbye First Love, inspired by her own romantic history. The relationship in the Wasikowska scenes is an updated version of the one depicted in Goodbye First Love. And so both Vicky Krieps and Mia Wasikowska are stand-ins for Hansen-Løve in this film. She’s writing and directing herself writing and directing herself.

I promise you, the movie is far less confusing to watch than to explain.

At any rate, today’s scene comes from the Wasikowska portion, and finds her Amy desperate to restart that long-ago love affair, but painfully realizing the man (Joseph, played by Anders Danielsen Lie) is ambivalent. They’re talking outside a bar when ABBA’s ‘The Winner Takes It All’ comes on. They move inside, where Amy joins some friends in dancing to the song, perhaps hoping to seduce him in the process.

As she gets lost in the dance, you see Joseph quietly slip out of the bar. It takes Amy a few moments to realize he’s gone, and once she does the exhilaration of the moment deflates instantly as she leaves to fruitlessly track him down.

[Verse 1]
I don’t wanna talk
About things we’ve gone through
Though it’s hurting me, now it’s history
I’ve played all my cards
And that’s what you’ve done, too
Nothing more to say, no more ace to play

[Verse 2]
I was in your arms
Thinking I belonged there
I figured it made sense, building me a fence
Building me a home
Thinking I’d be strong there
But I was a fool playing by the rules

[Chorus]
The gods may throw a dice
Their minds as cold as ice
And someone way down here
Loses someone dear
The winner takes it all (Takes it all)
The loser has to fall (Has to fall)
It’s simple and it’s plain (It seems plain)
Why should I complain? (Why complain)

[Verse 3]
But tell me, does she kiss
Like I used to kiss you?
Does it feel the same when she calls your name?
Somewhere deep inside
You must know I miss you
But what can I say? Rules must be obeyed