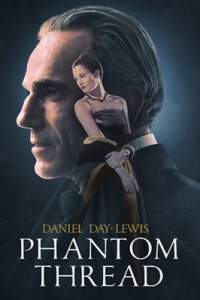 Paul Thomas Anderson’s most recent film, at the time of this writing, is the one — on its face — least like the others. 2017’s Phantom Thread is the first Anderson film not set in the United States; in fact, it’s the first not set in or just outside of California.

Set in London in 1954, a few years after The Master but on the other side of the globe, the film follows fashion designer Reynolds Woodcock (Daniel Day Lewis) and the many women in his orbit. Woodcock is a respected artist but an insufferable, fussy prig. He needs everything just so and erupts like a toddler when the world doesn’t cooperate. He is enabled by his stern sister, Cyril (Lesley Manville), who runs the House of Woodcock. Like Peggy in The Master, she is the real center of power, no matter what Reynolds imagines.

Into this hermetically sealed environment comes Alma (Vicky Krieps), a modest but fiercely independent waitress whom Reynolds meets on a trip to the countryside. She moves in with him, one in a series of fleeting love interests, but stakes a claim in a way nobody else has managed.

Their relationship is tumultuous, swinging from giddy romance to cold silence, depending entirely on Reynolds’ mood and current workload. But Alma breaks down his defenses in ways big and small, and finally borderline homicidal. The twisted sadomasochistic bond they forge might be unhealthy, but it also might be the best thing for both of them.

Phantom Thread is a sumptuous adult drama, the kind of movie nobody else seems to be making these days. After the pop art of Boogie Nights and Magnolia, and the avant garde experimentation of Punch-Drunk Love, Anderson has moved into the most fascinating and rich phase of his career.

He exhibits such elegance and formal mastery in his camerawork and compositions. Jonny Greenwood’s lush score and Mark Bridges’ sumptuous costume design are like fondant on the most beautiful cake you’ve ever seen. And this is a sharp, funny script — the unlikeliest of black comedies.

The acting, as usual, is top-notch. You expect nothing less from Daniel Day Lewis, so different here as the uptight Reynolds Woodcock than There Will Be Blood‘s gruff Daniel Plainview. The man’s range is astounding.

But he is somehow outgunned by his two co-stars. Manville is delicious as the icily direct Cyril. In one of the film’s best scenes, she cuts Reynolds to the quick with this beauty: “Don’t pick a fight with me, you certainly won’t come out alive. I’ll go right through you and it’ll be you who ends up on the floor. Understood?”

Little-known Krieps is a revelation, going toe to toe with the greatest actor of his generation and stealing the movie in the process.

Day Lewis and Manville were Oscar-nominated for their roles, and the film was also nominated for Picture, Director, Score and Costume Design. Its only win was for the costumes.

Phantom Thread is a crackling gothic romance, but it’s also a sly portrait of a difficult artist. It’s hard not to read Reynolds Woodcock as a stand-in for Anderson himself. Anderson has the inflated ego of any creator who accomplished as much as he did before the age of 30. And I can only imagine that Maya Rudolph (his partner and co-parent since 2001) is exactly the sort to cut him down to size.

That wraps up my look at Paul Thomas Anderson’s eight feature films. Tomorrow, I’ll give my rankings of his filmography so far.