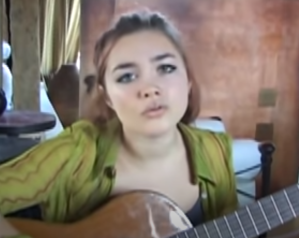 This week I’m featuring songs by artists much better known for their acting. Most of these artists have released recorded material either solo or with a band, but today’s selection is decidedly more amateur.

Like so many teenagers of her generation, Florence Pugh had a YouTube channel — under the name Flossie Rose — where she recorded musical performances. Only a handful remain, or maybe she recorded only a handful to begin with. The songs include ‘Hey Ho’ by The Lumineers and ‘Make You Feel My Love’ by Bob Dylan/Adele.

Lots of new fans are jumping on the Pugh bandwagon these days, following her scene-stealing turn in Black Widow. A Marvel blockbuster sure has a way of upping an actor’s profile.

I feel compelled to share my own Florence Pugh bona fides. While I wasn’t hip enough to catch her celebrated turn in Lady Macbeth in 2016 (I’ve seen it, but not until later), I was blown away by her a couple of years later in Outlaw King.

Playing the young bride of Chris Pine’s Robert the Bruce, Pugh delivered the very definition of a scene-stealing performance. She didn’t have much screen time, but every moment Robert was off traipsing through the mud to fight somebody in a kilt, I just wanted to know how things were going for Elizabeth De Burgh back at the homestead. At the time, I knew that whoever Florence Pugh was, I would make an effort to see everything she did.

A year later, I got my chance when she had one of the great runs by any young actor, appearing in Fighting For My Family, Midsommar and Little Women within a single calendar year, and earning a Best Supporting Actress Oscar nod for her fabulous turn as Little Women‘s Amy.

You’d think that lineup would have made her a household name, but apparently that took Marvel. Scan the comments on Instagram, Twitter and YouTube and you’ll see how many new fans she’s earned since Black Widow opened.

Good for her. The world needs more movie stars, and there are few young actors more deserving of the status.