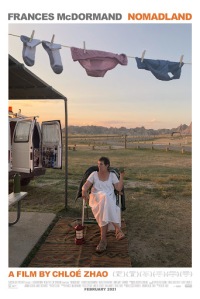 This Sunday, long after most people have forgotten what movies they watched in 2020, the Motion Picture Academy will broadcast the 93rd Academy Awards.

This week, I will play “If I Ran the Oscars” and list my own nominees for five main categories: Best Director, Best Supporting Actor and Actress, and Best Actor and Actress. I will not predict the actual winners, as there is an Oscar pool to win and I won’t be tipping my hand here.

As for Best Picture, I counted down my own top ten movies of 2020 several weeks back, and in my fantasy world that lineup (with one change due to a movie I’ve seen since) would compete for the top prize.

And the nominees are…

Few debut directors exhibit such a command of tone, and impressively, Fennell manages to do it while shifting that tone before our eyes, from black comedy to romcom to horror. Love it or hate it, you know from the opening frames of this film that you are watching exactly the movie Fennell wanted to make.

Regina King – One Night in Miami

Another debut filmmaker, King proved as brilliant a director of actors as she is an actor herself. Coaxing four of the best performances of the year out of her amazing cast, she embraces the “one room” conceit of the original play but knows exactly when to break out and show us more of the world these men are struggling to change.

Yet another first-time feature director, Marder delivered one of the most touching and graceful films of the year. He perfectly captures the specificity of both a heavy metal band on tour and a rehabilitation center for the deaf. It’s not surprising that Marder’s other film, 2008’s Loot, was a documentary. This one feels completely authentic.

OK, now we’re up to our fourth first-time director in this category. I’m not sure if that means a lot of veterans took the year off or we just have an exceptionally talented crop of newcomers right now. Zeller adapted his own play and created a gripping, emotional drama that feels like it was destined for the big screen. His use of camera movement and composition is crucial to conveying the growing sense of confusion suffered by Anthony Hopkins’ character.

The grizzled veteran among this group, Zhao now has three films to her name. I’ve seen only Nomadland, but this beautiful, soul-stirring film has made me a huge fan. Zhao managed to craft a poetic exploration of one woman’s grief and wanderlust while simultaneously depicting the plight of an underclass that has been left behind by American progress.

And the winner is… Chloe Zhao.