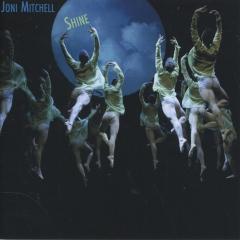 Joni Mitchell made an unexpected return to recording in 2007, releasing Shine, an album that seems likely to be her last.

Mitchell suffered an aneurysm in 2015 which robbed her of the ability to talk and walk, though she recovered her voice and is on her way to recovering her mobility. Her old friend and lover, James Taylor, recently said he believed Mitchell, now 77 years old, could even record new music again. I wouldn’t count her out.

Shine is a pretty decent swan song. Mitchell worked to improve her cigarette-ravaged voice and sounds better on this album than she had in years.

The album has just ten tracks, including an instrumental and a revisit of ‘Big Yellow Taxi,’ but the other eight songs are mostly very good. My favorites are ‘This Place,’ a song I can only describe as “circus reggae,” and ‘Night of the Iguana,’ a sensual epic based on John Huston’s 1964 film.

The final song on Mitchell’s (likely) final album is ‘If,’ an adaptation of a Rudyard Kipling poem. Mitchell had this to say about it:

The poem is written from a soldier’s perspective, so I rewrote some of the poetry. Kipling wrote, “If we can fill the journey/Of a minute/With 60 seconds worth of distance run/Then you’ll be a man, my son.”

I disagree with him, philosophically speaking, that endurance gives you the inheritance of the earth. My experience tells me that the earth is innocence, with wonder and delight, which is renewable. The blue heron on my property flies overhead, and I’m a 3-year-old. I’m filled with wonder and delight. So I rewrote that part of the poem as “If you can fill the journey/Of a minute/With 60 seconds worth of wonder and delight.” Kipling’s version is macho; I wanted to get the feminine principle into the poetry.”

Mitchell has been embodying the feminine principle through her poetry for half a century, and I’m thrilled to have taken this deep dive into her work.

That brings us to the end of the 19-album journey. Tomorrow I will wrap up Joni Mitchell Month with some final thoughts and my personal ranking of these records.

The tour bus came yesterday
The driver’s a mess today
It’s a dump of a destiny
But it’s got a view…
Now the kid in the see-through blouse
Is moving in hard on his holy vows…
Since the preacher’s not dead
Dead drunk will have to do!

The starlight is steaming
He’d like to be dreaming
His senses are screaming
Not to be denied…
But if the spell of the night should win
He could lose his bus
For the same sweet sin
That took his church from him
Then how will he survive?

The night is so fragrant
These women so flagrant
They could make him a vagrant
With the flick of a shawl.
The devil’s in sweet sixteen
The widow’s good looking but she gets mean
He’s burning like Augustine
With no help from God at all