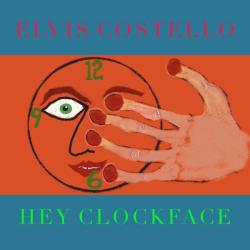 This week’s posts could be filed under an ‘OK Boomer’ label, because I’ll be featuring new work by five white guys in their 60s or 70s.

I have to hand it to this group of artists. Well past traditional retirement age, they’re cranking out interesting and relevant new music. Well, four of them are… one is dead, but his family is releasing new material.

Even so, it’s hard to get too excited about these new albums. These guys are building on towering resumés — how can anything they do have a chance of measuring up?

Take Elvis Costello, who recently released Hey Clockface, his 31st studio album. Does it have a chance in hell of reaching the heights of King of America, Get Happy!! or Imperial Bedroom? No way. But neither did 2018’s Look Now, and that was an excellent late-career release, the best thing he’d done in at least a decade, maybe two.

I’ve given Hey Clockface only one listen so far, so I’m not at all ready to offer up a verdict.

I’m not a fan of two spoken-word tracks. I don’t like spoken-word songs in general, with the notable exception of Costello’s ‘Episode of Blonde.’

I love today’s SOTD, the album’s third track and the first to really grab me.

Costello’s voice is starting to fail him in places, especially on the crooner and vaudeville tracks, of which there are a few.

Parts of this album (‘We Are All Cowards Now,’ for example) remind me of the best parts of 1994’s Brutal Youth. That album time travels me back to my early 20s, and it’s interesting to find this one doing something similar at times.

I read that these songs were recorded during two very different sessions — one rock and even hip-hop influenced, and one with a group of jazz musicians. You can easily tell which songs came from which session, and I’m definitely a bigger fan of the latter.

All in all, another solid outing by one of the most talented and unpredictable artists ever. If I’m not as blown away by a new Costello release as I was 30 years ago, that probably has more to do with me than him.

Tell me, how does it feel?
In the hour of deception and the moment of pretend
To be scorned by those rank and those unkind strangers
You were fool enough to call your friends

Will you say as the curtain descends?
“They’re not laughing at me now”

Where will you find thе courage to say?
“They’re not laughing at me now”

You could shake my hand
If I could unfold my fist
If I were a gentleman
If I were a Christian
But I wouldn’t risk it
Why would you?
You know my name now
And it’s “Mister” to you

Now we’re back at the start, no forgiveness in your heart
You turned your coat and asked me to turn my cheek
And it’s all in a language
That I can understand but never bring myself to speak

I’ll leave it to you, if you dare
It’s a peal too appalling to bear
I wonder if you’re here or you’re there
They’re not laughing at me now