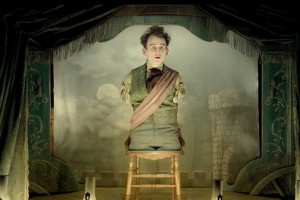 The third chapter of The Ballad of Buster Scruggs is by far the bleakest. Following two darkly comic segments, ‘Meal Ticket’ is just plain dark.

Liam Neeson stars as an impresario who travels from town to town with his act, an armless, legless man nicknamed Harrison the Wingless Thrush (played beautifully by Harry Melling, Dudley in the Harry Potter films). While he might look like a carnival side show act, Harrison’s talent is in his oratory. He eloquently delivers poetry, Shakespeare, Biblical verses and famous speeches from atop a stool.

The impresario cares for Harrison in every waking hour — feeding him, helping him use the bathroom — but he does so out of professional duty, not affection. In one telling moment he feeds the limbless man a spoonful of beans right from the pot, burning his mouth, before begrudgingly blowing on the next serving.

As the men ply their trade, the crowds begin to dwindle to the point where they’re making little to no money. The impresario notices a large crowd around another man’s cart, in which a chicken is seemingly performing math. He buys the chicken.

In the segment’s final scene, Harrison is riding stone-faced in the back of the cart, the chicken sitting in a cage beside him. The impresario stops alongside a high cliff, gets out, and tosses a large rock over the edge to test the depth of the river below. We know exactly what’s going to happen next, but the Coens don’t show us. Instead they jump ahead to the cart moving down the trail with now just the chicken in the back.

‘Meal Ticket’ is a bleak allegory for show business, with the chicken representing anything from reality TV to CGI-driven blockbusters. Harrison the Wingless Thrush, with his love of language and showman’s flair, could be the Coens themselves.

Not only do the crowds shift from the sophisticated to the sensational, but it’s so much easier to feed a chicken than support a helpless man. The suggestion is that true art requires time and effort, and producers chasing a quick buck aren’t willing to make the sacrifice. It’s interesting that, though the Coens wrote this script many years ago, it wound up as part of a movie they released through NetFlix, presumably because the support wasn’t there from a traditional studio.