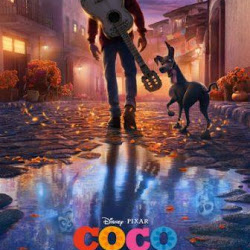 THe touching ‘Remember Me’ from Pixar’s Coco rounds out the nominations in this year’s Best Original Song category. I’ve written about this song already, during a week of my favorite musical movie moments of 2017, so it’s no secret that it’s a favorite.

Earlier this week I wrote that The Greatest Showman is the only true musical nominated in this category, but I suppose one could argue that Coco earns the label. It’s certainly the closest to a musical that Pixar has come to date.

Coco is filled with music, and music is essential to its plot, but characters don’t break into song out of context. Each musical performance is just that, a performance, one that makes sense in real-world (or ghost-world) context. It’s a musical in the way the biopic Walk the Line is a musical, which is to say it isn’t a musical at all.

I’d love to see Pixar tackle a bona fide musical along the lines of Disney’s Moana or Frozen. Surely the studio could put its unique stamp on that tried-and-true genre.