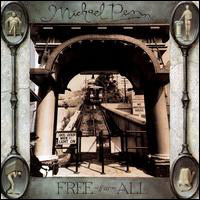 My #2 album of 1992 probably wouldn’t be in this spot if this list was less subjective. I don’t mean that as a slight to Michael Penn, whose sophomore album Free-For-All is a folk pop gem, but it’s hard to make an argument for this record being revelatory or important or any of the other highbrow things that land albums on lists like this.

But my list is entirely subjective, and Free-For-All was the soundtrack of one of the most important summers of my life, so damn it, here it is.

That year, I wore out a cassette tape containing this album on one side and my #1 album of 1992 on the flip side (check back tomorrow for the big reveal). Penn’s world-weary vocals and gentle acoustic rock was mind-opening and soul-soothing. I couldn’t get enough.

Free-For-All is the rare second album that tops an impressive debut. I love Penn’s March, but the earthier production of this record renders that one a little too polished. This is Penn’s best effort in a sadly thin discography — he’s released only 3 other albums in the 23 years since.

“Used to be a man could make his way
With a barrel full of this black coal,”
Half certain you’d say
But in my reach it

Look at every angle
And draw a square
Find some nut you can instead untighten
Watch me in the corner
With a pair
Under certain pressure
Ace, a diamond
So run your fingers down my back
You’d make such a cool distraction
Cause in my reach it