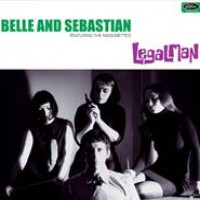 ‘Winter Wooskie’ is the third track on Belle & Sebastian’s 2000 Legal Man EP, released back in the days when the band would put out new material on singles in between their full-length albums.

The 25 songs they released this way between 1997 and 2001 combine to rival any of their LPs, and in fact the whole lot were released on a double disc in 2005 with the title Push Barman to Open Old Wounds.

I read that “wooskie” means to set yourself (or someone else) up for embarrassment, which makes some sense given the song’s lyrics. The lonely protagonist imagines himself in love with a woman he sees walking through the snow, and he videotapes her through his window.

This was the third and final lead vocal by Stuart David, who left the band the same year Legal Man was released.

Who’s that girl?
She must be nearly freezing
Who’s that girl out there?
All that snow makes it hard to see her
Did she wave to me?

I made a film
I made it through the window
But who’s that star I cast?
All wrapped up in her winter wardrobe
She hurries back so fast

On summer days, when the sun shines
I watch the tape
Through the snow, through the window
I watch her wave to me

Who’s that girl?
She must be nearly freezing