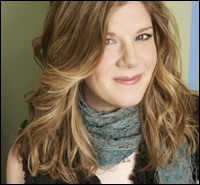 Initially I wasn’t sure if I should include Dar Williams in the set of artists I’m examing for the musical genome project. I own most but not all of her albums, and I know only a couple of them by heart. She has released her share of generic Lilith Fair soft rock snoozers.

But she has also written and recorded some of the best songs I’ve ever heard. ‘When I Was a Boy,’ for example, is a song I would list among my very favorites, not just for its musical and lyrical qualities but because it speaks to me on a deep emotional level. She can do that, and has, more than a few times.

Anybody who can speak to me on that level deserves to be considered here, though you could make the argument that Williams is just a quality songwriter who transcends labels, and the fact that her music doesn’t always work for me probably backs that up.

So where does Williams fit into my genome? I’d say she has one leg in the ‘Folk Rock Derivatives’ category and another in ‘Melancholy.’ Stylistically, she is squarely in folk rock territory, and her finest work is almost always on the sad, contemplative side.

Today’s SOTD is a fine example. ‘February’ uses winter as a metaphor for a suffering relationship. Recently I read a comment that suggested the song was about a couple dealing with Alzheimer’s and that really clicked for me. What do you think?

I threw your keys in the water, I looked back,
They’d frozen halfway down in the ice.
They froze up so quickly, the keys and their owners,
Even after the anger, it all turned silent, and
The everyday turned solitary,
So we came to February.

You know I think Christmas was a long red glare,
Shot up like a warning; we gave presents without cards,
And then the snow,
And then the snow came, we were always out shoveling,
And we’d drop to sleep exhausted,
Then we’d wake up, and its snowing.

The leaves were turning as we drove to the hardware store,
My new lover made me keys to the house,
And when we got home, we just started chopping wood,
Because you never know how next year will be,
And we’ll gather all our arms can carry,
I have lost to February.