Every couple of years (and more often than that lately), the Coen Brothers release another film that cements their place among America’s finest and most consistent filmmakers. Recently, on the heels of 2007’s Oscar-winning No Country For Old Men, they released the hilarious screwball comedy Burn After Reading and last year’s brilliantly dark Book of Job-inspired A Serious Man.

In 2010, they return with True Grit, not so much a remake of the 1969 John Wayne classic, they say, but a more faithful adaptation of Charles Portis’ 1968 novel. Having neither seen the original film nor read Portis’ novel, I’m in a position to judge the Coens’ film simply on its own merits.

True Grit, the Coens’ 15th film, is unlike anything else they’ve produced. For one thing, it’s a Western. And while that notion might scare some people (like my brother-in-law) away, it’s a boon for the brothers. Longtime Coen cinematographer Roger Deakins gets to work his magic on some beautiful scenery. The Coens have always done great things with open spaces (consider the forest scenes in Miller’s Crossing, the wide open snowscapes of Fargo and the treacherous open country of No Country For Old Men). Here, they have almost an entire film set outdoors.

And the familiar archetypes of the American Western dovetail nicely with two of the Coens’ favorite themes: the evil that men do to one another, and the ultimate indifference of the universe.

The other thing that makes True Grit unique in the Coens’ canon is that it’s a coming-of-age tale — this is the first of their films to feature a child in a leading role. That distinction, and the way it is handled, is what makes the film truly special.

The child is 14-year-old Mattie Ross (played by Hailee Steinfeld in her feature film debut). Following the murder of her father by the coward Tom Chaney (Josh Brolin), who escaped into Indian Country, she travels to the scene of the crime to bury her father and find a man of “true grit” to help her bring Chaney to justice.

She settles on Rooster Cogburn (Jeff Bridges), a drunk and nasty U.S. Marshall who has spent ample time on both sides of the law and is known for shooting first and asking questions later. Joining them on their trek is a peacock-proud Texas Ranger named LaBoeuf (Matt Damon), who is after Chaney for shooting a state senator back home.

This unlikely trio heads into the dangerous territory to hunt down Chaney and the gang he’s taken up with. Adventure ensues.

I often say that I need to see Coen Brothers films more than once to really get them. That’s not the case with True Grit. I’m eager to see the film again, to enjoy its rhythms and spend more time with these great characters, but it’s far more straight-forward in its ambitions than most of their work. This is the first Coen film since Raising Arizona, I think, that I loved whole-heartedly the first time through. 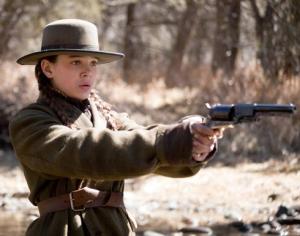 And I credit that response almost entirely to the extraordinary work of Hailee Steinfeld. Her Mattie Ross is as richly drawn and well-played a character as I’ve seen this year. Imagine: a then-13-year old girl lands her first movie role opposite Jeff Bridges, Matt Damon and Josh Brolin, in a film directed by the Coen Brothers. Talk about pressure. And to cap it off, the role is essentially the film’s lead, and it requires her to deliver reams of rapid, florid dialogue that’s a cross between Shakespeare and the King James Bible.

Steinfeld not only meets this challenge, she steals the movie from the award-winning cast of veterans, commanding every scene like a seasoned pro. The studio is pushing Steinfeld for Supporting Actress, a silly tradition wherein young actresses aren’t bestowed with lead acting status despite being in every frame of the movie. I don’t care if it’s for that award or the more appropriate Best Actress, but seeing Steinfeld take the stage at the Kodak Theatre next month would make my year.

Bridges is excellent, as always, and Matt Damon works wonders with the truly supporting role of LeBoeuf, delivering both comic flair and poignant dignity. Josh Brolin is a creepy delight as the dim-witted Tom Chaney, who looms over most of the film as an unseen menace, then shows up and reveals himself as something quite different.

As usual, the Coens stock the film with splendid character actors in the smaller roles. Particular kudos go to Dakin Matthews, playing Col. Stonehill, a man unlucky enough to find himself bartering with Mattie Ross over some horses. That early scene just might be my favorite of the year in any movie.

The journey we witness through Mattie’s eyes is alternately whimsical and harrowing, with moments of violence puncturing the atmosphere of adventure. However, the film (like the novel) is narrated by a grown-up Mattie, so we know she’ll escape with her life. We fear for her, but that security allows us to enjoy her coming of age with the knowledge that she actually will come of age.

Mattie’s stubbornness and idealism are tested on this trek, but I wouldn’t say her innocence is lost. A purity shines through her even in her darkest hours. The Coen Brothers, among the most uncompromising, cerebral filmmakers working today, have delivered a movie that bursts with heart, and they owe it all to a 14-year-old in braids.

This may be no country for old men, but it poses little challenge for a remarkable young girl.