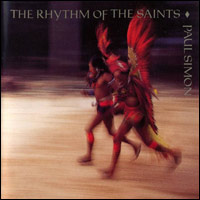 Graceland was a hard act to follow, to put it mildly, but four years later, Simon pulled it off by releasing 1990’s The Rhythm of the Saints, an album that built on the world music fusion of his masterpiece but felt like something completely new.

I was in my freshmen year of college when The Rhythm of the Saints came out and it was the first Paul Simon album that I bought on its release day. Before that, all of Simon’s music I had inherited or discovered. I spent my high school years familiarizing myself with the Simon and Garfunkel catalog, old classics I’d missed out on growing up. But the idea of new Paul Simon music that was new to the rest of the world, too, was exciting.

The Rhythm of the Saints knocked me out right off the bat. I used to play the opening song (and first single), ‘The Obvious child,’ on repeat and I once declared that if I had to pick a soundtrack to the rest of my life, a single song to play on a loop, that would be the one. Silliness, I know, but at the time I really meant it. It’s a really great song.

I told my sister and brother-in-law that I felt The Rhythm of the Saints might just be superior to Graceland and they disagreed. Months later, they came around to my opinion and I came around to theirs. I’m curious where they stand on the issue today (and I’m certain the comments will give me the answer). I consider it a close call but give the slight edge to Graceland.

My dad latched onto the sleepily lush ‘Further to Fly’ in the way he does on those rare occasions when a song really grabs him (Carly Simon’s rendition of ‘Itsy Bitsy Spider’ is another that got its hooks into him).

Apart from my early ‘Obvious Child’ obsession, I fell for the album as a whole. These songs blend together into a tapestry of earthy horns and percussion. It’s the kind of album that’s more rewarding heard all the way through than one song at a time.

The song that took the longest to grow on me is today’s Song of the Day, ‘She Moves On,’ and I’ve chosen to highlight it for that reason. It’s a great example of how sometimes the songs that sneak up on you and beat down your defenses become your favorites. I love this song now as much for its poetry as its seductive music. Such great lines here: “My heart still splashes inside my chest,” “her cold coffee eyes,” “we take a walk down in the maroon light.” Simon paints such a vivid portrait of this doomed relationship.

I know the reason I
Feel so blessed
My heart still splashes
Inside my chest, but she
She is like a top
She cannot stop
She moves on

Then I fall to my knees
Shake a rattle at the skies
And I’m afraid that I’ll be taken
Abandoned, forsaken
In her cold coffee eyes

Then I fall to my knees
I grow weak, I go slack
As if she’d captured the breath of my
voice in a bottle
And I can’t catch it back