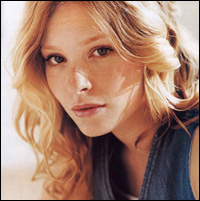 Here’s one for the “where are they now?” file. Of course, nobody really knew where Shea Seger was then either. Then would be 2001, when she released her first (and only) album, The May Street Project.

Seger is an interesting mix of a Norah Jones-style balladeer and a hip-hop sensibility. She strikes me as a more accessible version of Ani DiFranco or Tori Amos, which if you think about it is a really great thing to be. I don’t know if I can think of anybody recording today who fits that niche. The May Street Project was well-received critically and Seger had a minor hit with today’s SOTD.

And then nothing. She hasn’t recorded another album since, though she popped up on a soundtrack a couple of years ago. Every time I pull out The May Street Project — which, admittedly, is not very often — I wonder how somebody with clear talent and a sound that sets her apart from the pack could end up failing so completely.

But perhaps her long hiatus was something she wanted to do. I just Googled her and discovered via her MySpace page that she has an album due out soon, nine years after her debut. I’ll check that one out for sure.

As an aside, Seger is not the sort of woman I usually find attractive. She has long blonde hair and a rather angular face… sort of a Kim Raver or Ali Larter thing going on. Not my type. But in the official video for this song, which features her facing off in a ring against some sort of ultimate fighting champion, she is quite hot. That’s because she wears sweat pants and a white tank top, a favorite of mine. In the battle between “not my type” and “sweats and a white tank top,” the outfit wins out.

So there, you got me in your clutch again
So there, so there