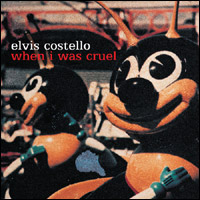 Four years after Painted From Memory, six years after All This Useless Beauty and eight years after Brutal Youth, Costello finally released another rock-n-roll album.

The album contains some of Costello’s best songwriting since Spike, including little-known gems such as ‘Episode of Blonde,’ ‘Spooky Girlfriend,’ ‘Tart,’ ‘My Little Blue Window’ and today’s song. The production is also first-rate, veering into electronica and even hip-hop flavors at times. This album shows Costello keeping up with the musical times much more effectively than he did on Punch the Clock and Goodbye Cruel World.

‘When I Was Cruel No. 2’ is a great example of a new sound for Costello that nonetheless contains all of his trademarks. The weird distorted bass that opens the song, the lurching drumbeat bed, the sampled French woman’s clipped vocal that repeats on a loop — these aren’t like anything on any Costello song before. But the lyrics and delivery? Vintage Elvis.

I particularly like the final verse, which recounts an (imagined) encounter between a rock journalist and Costello, with the former recalling when they first met and Elvis was “a spoilt child… with a record to plug.” He goes on, “Things haven’t really changed that much, one of us is still getting paid too much.” I love it!

Note: This clip contains the full album version (for a change) as well as a bonus song (‘Smile’) which didn’t appear on the album.

Not quite aside, they snide “She’s number four”
“There’s number three just by the door”
Those in the know, don’t even flatter her,
They go one better
“She was selling speedboats in a tradeshow when he met her”

She reaches out her arms to me
Imploring: “Another melody?”
So she can dance her husband out on the floor
The captains of industry just lie there where they fall

Two newspaper editors like playground sneaks
Running the book on which of them is going to last the week
One of them calls to me
And he says, “I know you”
“You gave me this tattoo back in ’82”
“You were a spoilt child then with a record to plug”
“And I was a shaven headed seaside thug”
“Things haven’t really changed that much”
“One of us is still getting paid too much”

Look at me now
She’s starting to yawn
She looks like she was born to it
Ah, but it was so much easier
When I was cruel