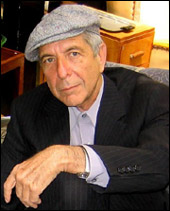 OK, enough of the light stuff, it’s time for something meaty.

Here’s a song I haven’t thought about in years by an artist with whom I should be far more familiar. Leonard Cohen is one of those unheralded geniuses who more popular artists always mention as an influence. And the one song of his that absolutely everybody has heard — ‘Hallelujah’ — they undoubtedly heard sung by somebody else.

His impossibly deep and gravelly voice makes him something of a tough listen, but other times it suits his songs just perfectly. This one is an excellent example. The second track on his 1992 album The Future, ‘Waiting for the Miracle’ is a moody epic about wasted opportunities that eats right into your soul.

I believe the “miracle” the singer is waiting for is true love, and he has shot down chances at more earthbound romance along the way and now finds himself regretful, having “waited half my life away.”

This is a great lyric start to finish. I especially love the line “The maestro says it’s Mozart but it sounds like bubble gum” and the final verse could stand alone as a lovely poem in its own right.

Ah I don’t believe you’d like it,
You wouldn’t like it here.
There ain’t no entertainment
and the judgments are severe.
The Maestro says it’s Mozart
but it sounds like bubble gum
when you’re waiting
for the miracle, for the miracle to come.

Waiting for the miracle
There’s nothing left to do.
I haven’t been this happy
since the end of World War II.

I dreamed about you, baby.
It was just the other night.
Most of you was naked
Ah but some of you was light.
The sands of time were falling
from your fingers and your thumb,
and you were waiting
for the miracle, for the miracle to come.

Ah baby, let’s get married,
we’ve been alone too long.
Let’s be alone together.
Let’s see if we’re that strong.
Yeah let’s do something crazy,
something absolutely wrong
while we’re waiting
for the miracle, for the miracle to come.

Nothing left to do …

When you’ve fallen on the highway
and you’re lying in the rain,
and they ask you how you’re doing
of course you’ll say you can’t complain.
If you’re squeezed for information,
that’s when you’ve got to play it dumb.
You just say you’re out there waiting
for the miracle, for the miracle to come