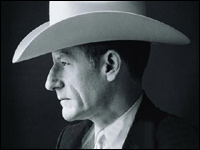 Ironically, I was first introduced to Lyle Lovett by my country music-hating brother-in-law, Dana. Because Lyle Lovett is many things, but he is most certainly a country music singer-songwriter.

However, as anybody familiar with his work knows, he is equally adept at blues, jazz and gospel. The truth is, he has established such a distinctive sound that he’s essentially a genre unto himself. “Lyle Lovett” means peerless musicianship, lyrics both poignant and clever and one of the best voices in the business.

My favorite Lovett album is The Road to Ensenada, but I first got to know him through And His Large Band… and Joshua Judges Ruth, the latter of which was just out in stores when I first started listening to him. Those two albums will always hold a very special place for me, especially Judges, which is yet another album that drops me back in the summer of ’92 when I first met Alex.

But today’s song comes from another classic Lovett album, Pontiac. I picked it because it is very much a country song, and it’s one of the best things he’s written. As a former country music hater myself, I feel somewhat liberated now that I can fully embrace the genre. Songs like this one are the reason why.

Come on, Dana, join the dark side!