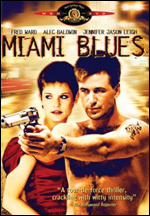 1990 was a landmark year for one of my favorite genres — the crime film. Martin Scorsese’s Goodfellas, the Coen Brothers’ Miller’s Crossing, Luc Besson’s La Femme Nikita and Stephen Frears’ The Grifters all hit screens that year to massive critical acclaim.

But lost in the pack was George Armitage’s stylish, funny and violent Miami Blues, an adaptation of Charles Willeford’s novel and one of the very best films of the 90s.

Alec Baldwin plays Freddie Frenger Jr., a dangerous ex-con who arrives in Miami as the film begins. Approached by a persistent Hare Krishna in the airport, he snaps the man’s fingers back and hops on a hotel shuttle. The Krishna dies, and Sgt. Hoke Moseley (Fred Ward) gets the case.

Junior is a thief by trade, looking to play any angle.

When he calls hooker Susie Waggoner (Jennifer Jason Leigh) to his hotel room, he’s as interested in selling her a stolen dress as he is in sleeping with her. But they bond quickly — Susie is a sweet, dim girl who’s never been treated well by a man; Junior sees a shortcut to the good life, with a pretty wife and a house with a white picket fence in Coral Gables. And he’ll rob anybody he can to get it.

The film plays out as a cat and mouse game between Moseley and Junior, with Susie caught in the middle. Baldwin is alternately hilarious and psychotic in his best big screen role. Fred Ward gives Moseley the gruff weariness of a classic noir hero. And Jennifer Jason Leigh, who was basically unknown at the time, delivers her finest ever performance… a scene where she shares her recipe for vinegar pie is award-worthy all by itself.

The film is violent but comical, sometimes simultaneously, as when Junior calmly says to Susie “I want you to sew my eyebrow back on.” Baldwin’s anti-hero is one of those characters you can’t help but love, despite his actions, and his dialogue is priceless. I spent much of my twenties quoting this movie incessantly.

If you’ve never seen this film, rent it immediately! As an added bonus, it was filmed throughout South Florida, so those of you who (like me) live or have lived in that area will recognize many of the locations.