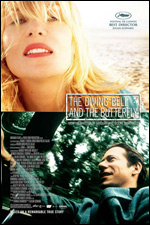 This is a film I avoided for awhile because it fell into the “want to have seen it” category. So now that I’ve seen it, I’m glad I did, but I wouldn’t choose to ever see it again.

Director Julian Schnabel does a wonderful job of putting the audience in the body (and mind) of Jean-Dominique Bauby, the French Elle editor who suffered a stroke and became almost completely paralyzed. Bauby’s only means of communication is through blinking his one good eye (take that, Christy Brown!) and with the help of his saintly, beautiful speech therapist, he is able to not only communicate but write a best-selling memoir.

The book (which I haven’t read) and movie are often described as uplifting despite the grim subject matter. I didn’t get that. I couldn’t help but feel Bauby was trapped in a perpetual hell, the butterfly of his imagination be damned. This reaction is underscored by Schnabel’s frequent tactic of shooting the film from behind Bauby’s eye… so the screen blinks when he does, and people are slightly offscreen and out of focus. There are jarring moments when we leave this perspective and the camera is set free along with Bauby’s imagination — memories of time spent with his lovers and children, vivid dreams, flights of fancy.

Powerful stuff, no question. But despite the stellar film making, great soundtrack and moving performances (Emmanuelle Seigner is a particular standout as the mother of Bauby’s children), I was glad when the film was over. In a way, that’s a testament to the film’s power (and the resonance of Bauby’s story). But ultimately I want to be entertained, even by a tragedy, and on that front Diving Bell falls short.

5 thoughts on “The Diving Bell and the Butterfly”